Calvin W. Burnett was born in Cambridge, Massachusetts in 1921. He graduated from the Massachusetts School of Art in 1942 and received his M.F.A. from Boston University in 1960.

Born in Cambridge, Mr. Burnett was one of four children and grew up during the Great Depression, when his father’s work as a physician afforded the family little financial security. Some patients were so poor that they paid his father with chickens or beans, Mr. Burnett told the Smithsonian.

Not fond of school, Mr. Burnett found he had a talent for drawing, beginning with copying comic strips from the newspaper. He graduated from Cambridge High and Latin School and went to the Massachusetts College of Art.

During World War II, Mr. Burnett worked in a shipyard because his eyesight was so poor he could not serve in the military. Afterward, he returned to the Massachusetts College of Art to train as a teacher. The experience, he said, illuminated the roles of the artist and the teacher and how one person sometimes could not be both…(credit)

He taught at a number of institutions in the northeastern United States, including the Massachusetts College of Art and the DeCordova Museum. His work has been exhibited extensively throughout the United States in galleries and museums including the Smithsonian Institution and the Brooklyn Museum. 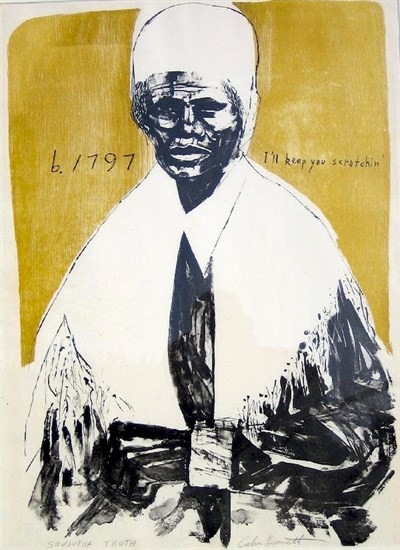 He went on to teach at the Elma Lewis School in the heavily segregated Boston neighborhood of Roxbury. His early teaching experiences may have been the inspiration for his 1969 lithograph Freedom Fighter for Operation Exodus. A community-based response to the established segregation of the Boston public school system, Operation Exodus was established in 1965 as a voluntary, self-funded program that bused African American children from the overpopulated schools of Roxbury and Dorchester to under-enrolled, predominantly white schools. This program laid the foundation for the Metropolitan Council for Educational Opportunity until court-ordered desegregation of Boston schools in 1974. Like many of his contemporary African American artists, Burnett immortalizes his Freedom Fighter as a strong, proud black figure symbolizing the shared struggle of racial equality and civil rights. Burnett returned to teach at Massachusetts College of Art for more than 30 years.

The artist died in 2007 in Medway, Massachusetts. 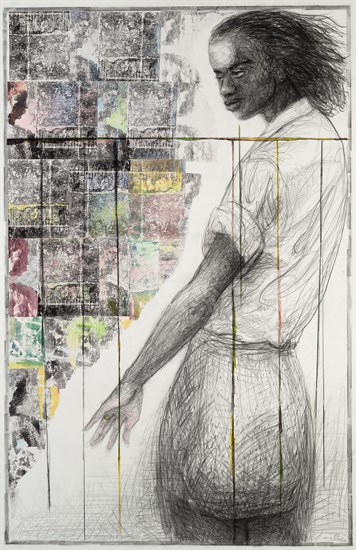 As an artist and an art teacher, Calvin W. Burnett believed in knowing the rules and having the insight to break them.

“It’s almost as though everything is right in relation to some aspect of whatever they happen to be doing,” he said of his students in a 1980 oral history interview for the Smithsonian Institution Archives of American Art. “That is, any kind of line you draw with any kind of tool is right and good depending on what you are drawing. It’s like there is no such thing as a good color or bad color or a correct color combination; it’s only what you’re trying to express with the color and what it’s all about.”

Proudly eclectic, he worked in many mediums, sometimes mixing one with another, and taught at the Massachusetts College of Art for 33 years. Mr. Burnett died Monday in Medway Country Manor nursing home of complications of Alzheimer’s disease. He was 86 and had lived in Medway for three decades.

Writing in the Globe about a 1972 exhibition, Robert Taylor said Mr. Burnett’s best pieces presented “the visual equivalent of the sound of Billie Holiday or Bessie Smith – a dark, indelible sorrow like the weight of an endless gloomy Sunday and, despite its burden, a determination to survive.”

Mr. Burnett, Taylor wrote, “is essentially an artist who realizes his concepts graphically. Black, white, and half-tones of gray lend his angular, swooping line a mood of introversion.”

From sketches to paintings, woodcuts, collage, and photographic elements, Mr. Burnett followed his muse down any avenue and felt a kinship with each approach. In the Smithsonian oral history, he called the interviewer’s attention to the disparate styles of his work in the room where they were speaking.

READ THE FULL OBITUARY FROM BOSTON.COM

Summary: An interview of Calvin Burnett conducted 1980 June 13-1981 January 6, by Robert Brown, for the Archives of American Art.

Burnett speaks of his education at the Massachusetts College of Art, Boston; freelancing in commercial art; his career as a black artist; teaching methods; recent paintings; and his civil rights activities.

These interviews are part of the Archives of American Art Oral History Program, started in 1958 to document the history of the visual arts in the United States, primarily through interviews with artists, historians, dealers, critics and others.

READ THE TRANSCRIPT FROM THE SMITHSONIAN